Our first launch is currently scheduled for March 9th from 10:00 am till 3:00 pm. It will be out in DeKalb, IL, at the Walter Farm. You can find the clubs complete launch schedule on the website on the Launches page.

We had a very good launch on October 8th, the weather was very nice, we had sunny skies with minimal cloud cover, the winds were in the 10 mph range with temperatures in the 60’s. We had a nice turn out, we had 15 Hi-Power launches with the largest being by Jerry Vida an Aerotech K535 motor. We also had two Level 2 certifications one was by Bill Stearns using a Madcow Rocketry Sensor with a Aerotech J270 motor. Bill’s flight was a perfect flight to about 1800′ and rocket was recovered undamaged. The other Level 2 flight was by Dennis McAuliff he used a Loc Precision Warlock with an Aerotech J425 motor. It was another perfect flight to about 2300′ and the rocket was recovered undamaged. We also launched the old club project rocket which was built in the early 2000’s and last flew in 2004. It was a DG&A Armageddon it was flown by Bob Jablonski on a J425 to about 1600′ it still flew great after all these years.

All the flights for the day flew excellent, you can check out the launch logs for more details on who flew what.

We also had a cookout at the launch with Bill Stearns and Tracy Ramsey handling all the details, so thank you to both of them for the extra work they put into making it a success. I also want to thank our on site vendor Bob Jablonski from County Line Hobbies for coming out to the launch with all of his rocket merchandise.

Thanks to everyone who made it out to the launch, I think everyone at the launch had a good time. Our next launch is scheduled for Saturday November 12th in DeKalb, I hope many of you are able to attend. We also have a meeting coming up on Saturday November 5th. It will be from 1:00 – 4:30 in meeting room “C” at the 95th Street Library, Naperville. 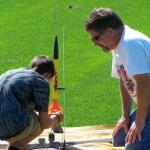 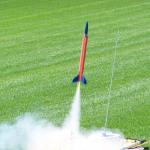 We had 2 new members join the club. They were Paul Glonek and Kevin Kunstman. We had our members only contest on August 11th for the month, it was scratch built rockets and the winner of the contest was Chris Cantine. He won a $20 gift card to Hobby Lobby. We also had our monthly club raffle and we raised another $86, thanks to everyone who participated. The winner of the raffle was Bill Stearns. He won 2 rocket kits – one was a PML “Black Brant VB” and the other was a Fliskits “Saturn 1B”.

Also, for the first time, we had a vendor out at both launches – Bill from Balsa Machining Services. It was very nice to have him out there with many of his items available. He is planning to come out to more of our launches in the future.

There were a lot of great flights for both launches from many people, so please check out the launch logs for who launched what. There were also some pictures taken, so please go and check them out in the photo gallery.

Our next club launch is scheduled for September 8th from 10:00 am to 3:00 pm, hopefully the good weather will continue and we have a lot of people come out and enjoy the launch. Thanks to everyone who made it out to our launches in August. 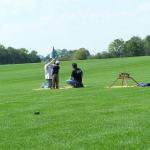 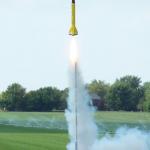 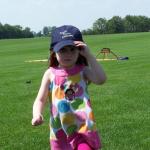